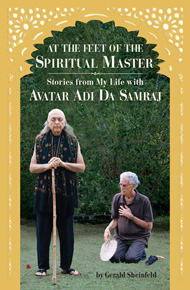 “It was not possible for Me to be received without first Submitting Myself (as I have Done) to the point of Perfect Coincidence and Perfect Identification with all-and-All—Such That all-and-All Are My Person."
“My Divine Avataric Self-Submission Was a Means Whereby I Took On the pattern of humankind (and of the ‘world’ altogether), in order to Transform that pattern in My Own Person."

“What is supremely attractive in the conditionally manifested universe and in the human “world” is the Real-God-Man. All beings, male or female, must become Attracted, Distracted by That One. This is the Ultimate Means, the Supreme Means, the Supreme Yoga. It is for this reason that the Divine Appears in manifested form in the likeness of those beings who are to be Drawn out of bondage—but only in their likeness. It is the Divine That Appears in that likeness, and it is the Divine That is made visible through that likeness. Those who become capable of recognizing That One become capable of responding to That Attraction. And those who become capable of being Distracted by that One become participants in this Supreme Way, Which is truly the Way of Divine Grace, because it requires no effort. It requires nothing but Divine Grace and the response to it.”

THE DIVINE DOES THE YOGA

"I do not operate by giving My devotee a method to realize Oneness with Real God. It is a hopeless task."

"It is not My devotee who, through effort, realizes non-separateness from God. Rather it is I Who live My devotee as non-separate from Real God, from My Own Divine Self-Nature, Self-Condition, and Self-State."

"And My living of My devotee becomes spontaneous Knowledge of Me in My devotee. I first transform My devotee, then My devotee begins to realize what has happened. That very Process must be enabled wherein the Divine can enact Oneness with the devotee, and then the devotee, depending on the degree of his or her intelligence, sooner or later realizes that that is the case. And that is how the principal of devotion works."

"That is what makes it different from the principal of the search. In the search you begin separate or at least presuming yourself to be separate or unenlightened or whatever it may be. You strategically work to realize Oneness, Identity, Union, and you essentially do this by methodically, strategically duplicating the experiential path whereby some other individual realized such Oneness, or felt that such Oneness was the case, or intuited something about it."